Talk: Christian List - The Naturalistic Case for Free Will 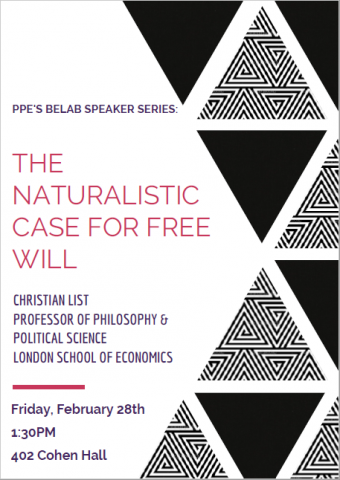 The Naturalistic Case for Free Will

Abstract: Free-will scepticism is becoming increasingly influential. A number of popular science writers and some scientists in fields ranging from physics to neuroscience have prominently argued that the notion of free will – a person’s capacity to choose and control his or her own actions – has no place in modern science. Human actions, they say, are caused not by people’s conscious mental states, but by physical processes in their brains and bodies and the world at large, processes over which people have no control. If this is right, the idea of free will is a remnant of a superseded, unscientific worldview. The aim of this talk is to argue against this growing scepticism. My thesis is that, far from being undermined by a scientific worldview, the idea of free will is actually supported by the sciences of human behaviour. Free will, carefully defined, is a three-part capacity: the capacity of intentional agency, choice between alternative possibilities, and causal control over the resulting actions. This capacity, I suggest, is presupposed by some of our best explanatory theories of human decision-making, including decision and game theory in economics and the social sciences. Insofar as we have good grounds to adopt a realist interpretation of our best scientific theories, there is a good naturalistic case for free will. An informal background paper is available at: https://philpapers.org/archive/CARFWR.pdf

Professor of Philosophy and Political Science