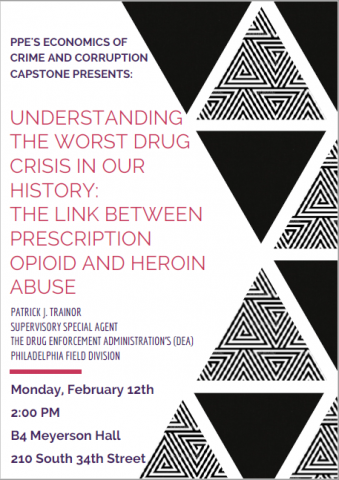 Understand the Worst Drug Crisis in Our History: The Link between Prescription Opioid and Heroin Abuse

Bio: Patrick J. Trainor is a Supervisory Special Agent with the Drug Enforcement Administration’s (DEA) Philadelphia Field Division.  Trainor joined the DEA in 1998 and served as a field agent until 2016 doing conspiracy cases and working in a group that investigated drug-related murders in the City of Philadelphia.  Trainor is also a member of the DEA’s clandestine laboratory enforcement team and served as the DEA’s coordinator of operations to all synthetic drug laboratories across Pennsylvania and Delaware.  In 2016, Trainor was appointed the Public Information Officer where he was responsible for managing the DEA’s external communications.  In that capacity, Trainor has been featured in local, regional, national, and international press where he has interviewed about the opioid crisis.  Trainor also served as a member of the Mayor’s Task Force to Address the Opioid Epidemic in Philadelphia.  In 2017, Trainor was promoted to Supervisory Special Agent where he supervises an enforcement group that investigates criminal violations of DEA registrants.  A graduate of Fordham University and the John Jay College of Criminal Justice, Trainor worked for the FBI’s National Security Division in New York City prior to joining the DEA.

Open to the Public.