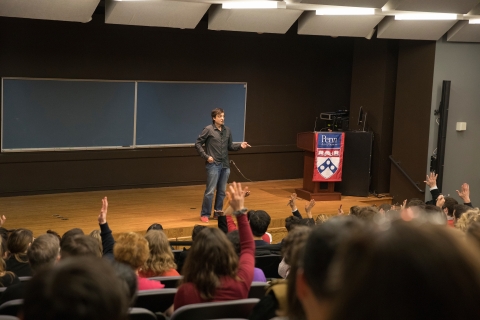 Speaking to a packed audience at the Penn Museum, Professor Dan Ariely, founding Member of Duke's Center for Advanced Hindsight, delivered an engaging address very much in the spirit of PPE – using behavioral science to inform how we structure our institutions. He primarily focused on a fundamental tension we all have between wanting to conceive of ourselves as honest while also wanting the small scale benefits we can get from cheating and deception. The key predictor for whether we cheat/lie has to do with whether we can rationalize the behavior. One of the interesting upshots Dan highlighted was the importance of reducing conflicts of interests (and thereby reducing what can be rationalized) in our institutions. He gave the example of a new insurance company he’s helped structure, Lemonade (https://www.lemonade.com/). The basic idea is that insurance is usually a two-player game between the person insured and the insurance company. When a claim gets filed there’s direct conflict over how much the company should cover, and this creates space for rationalizing, cheating, and lying on insurance claims. So, Dan had Lemonade introduce a third party: 1 of 14 charities. 10% of the company’s revenue at the end of the year goes to the charity of the insured person’s choice. If the company can spend less on claims, more money goes to charity! Not only has this reduced lying and cheating on claims (because now part of who you are cheating is your charity of choice), but they’ve had something like 5% of claimants actually return overpayments. The major takeaway: when we move away from the economic model that assumes everyone rationally calculates every decision and take behavior seriously, we can use that to set up rules and institutions to foster better decision making.

Thank you, Dan, for an amazing talk, and thanks to everyone who was able to join the event!